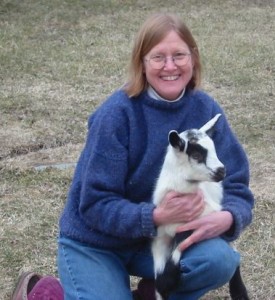 Not raised in a farm family or in farm country, I entered the world of dairy goats quite by accident. Having vacationed on a farm as a young child, I fell in love with the Holsteins grazing that land. I had no further contact with livestock until years later when living in a converted barn on a former Pennsylvania farm, I became attached to a single goat owned by my landlord. When a friend who owned horses suggested several years after that that she could offer barn space if I wished to purchase an animal, I immediately thought “goat!” and the deed was done.

Buying first a Toggenburg, then soon therafter a Nubian, I purchased my initial purebred French Alpine, Greenfields Mary Lou, in 1976. Within a year, I had chosen Alpines as my breed of choice.  With minimal knowledge at that point as to how to judge quality, I was very fortunate in my selection. Mary Lou descended from well known West Coast bloodlines, and she proved to be an outstanding foundation doe, as evidenced by the fact that every doe in our current herd descends from her!!  Mary Lou was outcrossed with the famous Sunshine Robelta’s Rommel, owned by Art Keefe. We then purchased *B Little Rise SS Asher Benjamin, a son of Sunshine Stella’s Strike, out of another GCH Rommel daughter, and our breeding program was launched.

Never intending the goats to be a major source of income, I still aimed to have them pay for themselves. We made improvements to the old dairy barn we’d inherited with the property in Windsor, VT and in 1986  we became licensed as a milk handler/dairy in Vermont. We shipped all of our milk to the Vermont Butter and Cheese Company in Barre, VT.  From that time until moving to Lebanon, NH in 1997. Soon after our move, the Cheese Company decided that they no longer needed our milk, and our days as a dairy ended until 2017, when we connected with Main Street Cheese in Hancock, NH. Needing a milk supply, we renovated the milk house, and became licensed by the State of NH for the first time in almost twenty years!

Our focus in recent years has been that of maintaining a small, top quality, herd of high performance animals, and we are pleased with our results. We have bred twenty-eight Permanent Champion Alpines, (see Hall of Fame) while rarely showing at more than 2 or 3 shows per season.  Thirteen of our twenty-seven Permanent Champions, including the beautiful GCH Roeburn’s SVL Layla, are descended from Mary Lou. We have been on DHIA/DHIR since 1980, and with the exception of two years, have been appraised annually since the program began. Repeatedly, customers and others familiar with our herd comment on the consistency they see in our animals.  As of 2014, our linear appraisal herd average score (does) stands at 90.25!!

We were extremely pleased to have our herd featured in the May 2006 Alpine issue of the United Caprine News, in the article entitled “The Roeburn herd is small but mighty”.  Our herd was again highlighted in the 2010 Alpine issue.  Please contact us  if you would like a copy of either of these articles!

Our current herd has been strongly influenced by two outstanding and pre-potent herd sires. The first is our former senior herd sire, +*B  SG Roeburn’s Gatwick Brutus, an ADGA Elite sire, who sired  Top Ten does SG Eliana and SG Joie de Vivre, and has been used by a number of Alpine breeders across the country.  The second is ++*B Kickapoo-Valley HL Lord Wimsey, aka “Petey”, our senior herd sire for several years until his sale in 2014. Petey also has sired GCH sons and daughters across the US and we consider him to be the most consistent herd sire for correct type that we have ever owned.

Our breeding goal for the 2019 breeding season was to use AI to return to the Brutus and Petey genetics that have worked so well for us in the past and raised the profile of the Roeburn herd.  Having brought in other genetics over the past few years, our aim now is to “stamp” in the type and production that these bucks contributed to our breeding program over the past two decades.  We are very excited to have succeeded in breeding five does to Petey and Brutus by AI this season, and now look forward to a whole new generation of sons and daughters of these two outstanding sires.

Because almost the entire herd were “Petey” daughters and granddaughters, we really could no longer use him, the reason for his eventual sale. In 2014 we added the handsome Pleasant-Grove Notable Nikola, who proved to be an extremely strong general appearance sire, producing daughters with tremendous length of bdy and levelness over the top line and rump, and standing with correct set to the legs.  Now our senior herd sire (sold 11/19), Addi-Hill Ledger Corelli was added in 2013 to carry on our program of line breeding on our SGCH Rose of Sharon doe line. We freshened our first two daughters in 2018 (it takes way too long to prove our bucks with our small herd size!), and we have been very pleased  with both Jazarah and Celeste, who are both very structurally correct and freshened with beautiful mammary systems. In 2018 we have added another Kickapoo-Valley junior herd sire, Jed, who is linebred on our Roeburn’s KVLW Be Proud Merry FS 90, bringing back in the Petey genetics combined with our Sedric Marta line.  This past spring we added a junior herd sire, Andreas, from the Kara-Kahl herd, out of the very beautiful Antonia, who sadly died in the complex delivery of quadruplets.

“Where did you get the ‘Roeburn’ prefix”, is a question I’ve often been asked. “Roeburn” was the name of the  summer home my great-grandfather built in Northfield, MA in 1897. The main house was a large and detailed replica of a swiss chalet built in the style of the Bernese Oberland,  where the family had travelled and lived in Switzerland. “Roe” is a family name and the house in Northfield was situated next to a brook, often called a “burn” in the British Isles; therefore the name “Roeburn”. When the property in Northfield  passed out of our family, I decided to carry on the name by taking it for my herd name. We were fortunate in 2017 to  connect with the present owner of the house, who is in his 90’s, and purchased it directly from our family in the 1960’s.  We accepted his generous invitation to visit the house, which I had last seen when I was approximately 10 years old. Very exciting for me!

We thank all those of you who have purchased stock from us over the years for your support and confidence!