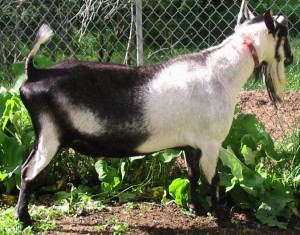 We were VERY excited to have successfully bred Rose of Sharon to Sedric in 2005, and were only very mildly disappointed when she had just the single buck, as a Sedric son from Sharon was what we had so hoped for!! Sedric daughters comprised the first place Senior Get of Sire at the 2004 ADGA National show! Sedric is a line bred buck, whose bloodlines go back to Sunshine Stella’s Strike and Sunshine Robelta Rommel, top Alpines sires of the 1970’s on whom our early herd was based. His daughters in the One*Oak* Hill herd include Stiletto, FS 92 EEEE, Sihlvanna 3-0 90 VEEE, and Saphy, 2-7 89 EEEE as a first freshener.

Now mature, we decided to have Bruno appraised again in 2009, as he has changed so much from when he was last appraised as a yearling. We were very pleased with his score of 91, as it reflects his excellence more accurately. Bruno is exceptionally long bodied, with great length in the rump. He tracks very straight in the front legs, and has good width in the chest floor. He is very tall, high and sharp in the withers. His daughter, Bon Bini, our favorite of the 2007 kids, is an elegant doe, who won her very large class at the Southern VT show in 6/07, and won her dry leg as a yearling, going Best Junior Doe in Show! Also Bruno’s first daughter to freshen, Bon Bini is now a finished Champion who appraised 90 VEEE at age three. Overall, Bruno appears to be throwing excellent length of body, levelness over the topline, and width throughout.