Return to Hall of Fame Bucks 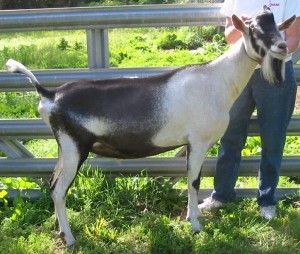 We really cannot say enough about Petey!! He is without a doubt living up to his pedigree, and throwing his own extremely correct body type. We used him heavily for the past several years, and we could not be more pleased with his offspring!! As soon as we saw his first kids, we were excited, and began to believe that we might have a real winner in Petey!! The majority of the herd are now Petey daughters, and include three GCH daughters, GCH Caliente, GCH Sapphira, and GCH Cuitadella. Four daughters have earned their dry legs, and two others have earned Reserve Junior Championship wins as kids. Caliente was the first, first freshener we have ever had earn her Permanent Championship! Petey is throwing the consistency of type we so admire; his daughters are uniformly tall, very long-bodied, extremely level does with correct leg set. They are sharp, “typey” does as well, who show smoothness of blending and outstanding dairy character. His daughters have high, well arched rear udders, and extremely well extended fore udders which are perfectly blended into the abdomen, without the slightest hint of a shelf. Petey is throwing the production as well, with first freshening daughters milking up to 14 lbs! Petey is without a doubt one of the finest bucks we have owned.

We had admired Petey’s dam, Whimsay, ever since she was a kid, placing 4X Best in Show, then going on to become the 2006 Junior National Champion. When we learned that a Whimsey X Liason son was available in 2008, we jumped on the opportunity to add him to the herd!! In 2008, Whimsay both finished her Championship, and placed 4th 2 year old at the National! In 2009, Whimsay continued to excel in the show ring, placing 5X BOB and 4X Best In Show. We see “Petey” as a buck who will carry on the Liason line, which has worked so well in our herd, while bringing in more of the outstanding qualities so obvious in the Saga offspring.
Petey is, like his dam, very tall and long bodied, very dairy, with a strikingly level topline and rump. He is wide throughout, stands straight in the fore legs, and has excellent rear leg angulation. He is sharp over the withers, and smoothly blended in his shoulder assembly. Over and over again, when considering the season’s breedings, we have found ourselves choosing Petey as the buck most likely to produce structural improvement, and we continue to see him in this way. He were extremely pleased with his Linear Appraisal score in 2011 of 91 (E E E). Petey already has sons in New Jersey, Oregon, Arizona, Maine, Iowa, Illinois, Vermont, Massachusetts, Pennsylvania, and Alberta and Quebec, Canada.

We feel very fortunate to have been able to add Petey to the herd, and again thank the Jodlowski family for allowing us to purchase him.