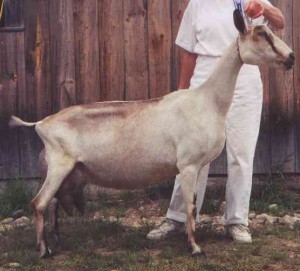 Virtually a carbon copy of her dam in appearance, Joie is a stylish doe with exquisite dairy character. She is long-bodied and smoothly blended throughout, with an extremely level topline and rump. She has a beautiful mammary system, with a high arched rear udder, and outstanding fore extension (40 on linear appraisal!). Perhaps even more impressive than her elegance of type is her production: she exceeded 3500 lbs. as a first freshener! We were thrilled to have had Joie place #6 on the 2005 ADGA Top Ten list for production and #9 for Butterfat! Unfortunately, she has larger than ideal teat size, which detracts from her general appearance. Shown 5 times in 2003 as a 2 year old first freshener, she placed 4X 1st, 1 X 2nd, and 3 X Reserve GCH! With Rose of Sharon newly fresh in 2004, Joie had very serious competition: shown 4 X, she placed 1 X 1st, 2 X 2nd, 1 X 3rd, and 1 X RGCH. With 4 Reserve GCH wins, we fully expected to finish her in 2005, but it was not to be. At the first show of the season, and on one other occasion, Joie collapsed from heat stroke, and we came close to losing her. As we have decided no longer to show her, her LA scores will just have to tell the story!

We have been extremely pleased with Joie’s twin daughters, Loca and Nina (recently sold), who are very stylish, upstanding does with lovely mammary systems, clearly demonstrating her value also as a brood doe. In fact, our current herd includes two daughters and 4 granddaughters of Joie! Unfortunately, Joie kidded in 2006 with a stillborn doe and did not produce as she had in the past, but she still exceeded 3000 lbs. in the lactation.