Return to Hall of Fame 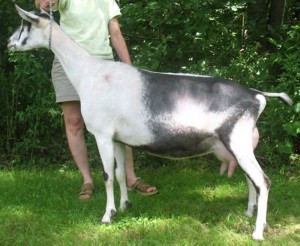 Our top doeling of 2010, “Della” has from the start been a tall, stylish, and extremely correct doe. Shown three times in large classes as a kid, she placed 1st twice, 2nd X1 (behind her twin, Basi), and 1X Reserve GCH!  Shown once as a dry yearling, Della placed 1st and Junior Champion, earning her dry leg!
As a first freshening two year old, Della placed 1st and Reserve GCH at her first show as a milker, at the NH DGA Spring show, 1st at the Southern VT show in June, and 2nd behind Gabby in her final show of the season. She has a beautiful mammary in all respects, scoring a 40 in rear udder height and a 38 in fore udder attachment.  A clear winner in the show ring, Della looked her best as a 3 year old, going on to finish her Championship with wins at the annual NH DGA spring show, and the Sandwich Fair, where she was also chosen Best in Show!! With single kids the past two years, she did not produced as well as we would like, and she did not settle in 2016, but kept us in milk through the winter. Given the value we place on this doe, we are trying again, and hoping for the best!