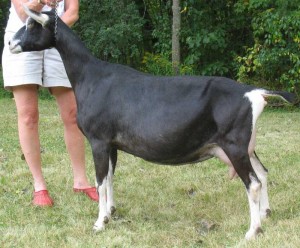 A growthy, stylish kid in 2005 with a beautifully level topline and excellent dairy character, Velvet started off her show career at the Southern VT DGA show, placing first in a very large kid class. As correct as she is structurally, however, like her dam Sharon, it has been her indescribably gorgeous mammary which has consistently placed her at the top of the milking classes over the past two years! Her rear udder is extremely high, wide and arched, beautifully blended into her escutcheon, and the length and blending of her fore extension is truly ideal. Appraised as a second freshener in 2008, she scored 42 in rear udder height, and 47 in fore extension! Shown three times in 2007, she went 3X 1st, and 2X GCH in stiff competition, winning two official GCH legs!! She finished her GCH at the 2008 Southern VT show. She and Sheba have consistently earned 1st place Produce of Dam in the shows offering a Produce class. At our third show of the 2008 season, shown in the Champion Challenge class, she placed 1st and Best of Breed, then went on to win Best Udder in Show! Shown only once in 2009, Velvet went Best In Show against 144 milking does at the Southern VT DGA show in June. In 2010, Velvet earned her permanent LA score of 92 (E E V E), with a 45 in fore udder. A third generation 92, Velvet is without question one of our most valuable does. Velvet has sons working in herds in ME, MA, AZ, and PA. 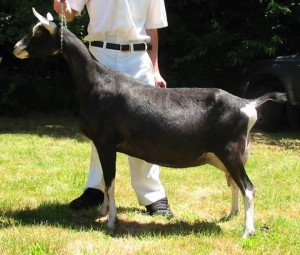